I worked at Walt Disney Imagineering from 1989 to 1994. The LA Times recently interviewed me about my experience there. I was let go, along with about 800 other people, when the Disney Decade ended. My heart goes out to all those who were laid off. Hopefully by now they have found new work. Here is the interview and then some videos, including the new Leslie Iwerks documentary about WDI. 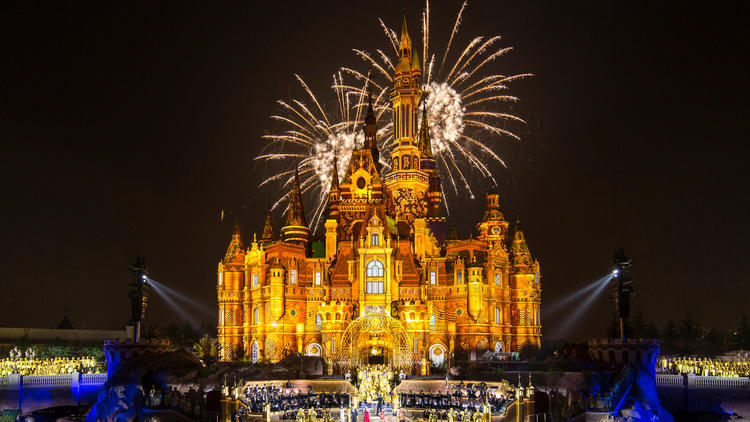 Shanghai Disneyland
Nearly two months after opening Shanghai Disney Resort, Disney Imagineering has announced a round of layoffs. During the opening celebration for the resort, fireworks explode over the Enchanted Storybook Castle. (Walt Disney Co.)

Nearly two months after opening its latest theme park, Walt Disney Imagineering has laid off some of the designers and builders who dream up the company’s parks and attractions.

Representatives for Disney Imagineering, a Glendale-based division of the Walt Disney Co. with about 2,000 employees, confirmed the layoffs but declined to specify how many employees were let go except to say that the percentage was in the “low single digits.” Separately, Burbank-based Walt Disney Co. is set to report its earnings Tuesday after the market closes.

With the June 16 opening of Shanghai Disney Resort park falling near the end of the quarter, observers will be curious to see how it affected the parks and resorts division and whether Disney executives shed any light on the new property’s performance thus far.

Analysts are predicting that the company will deliver earnings per share of $1.61, according to investment research firm Zacks. That would be up 11% from the same quarter a year earlier. During the most recent third quarter, Disney released the blockbuster “Captain America: Civil War,” which has grossed more than $1 billion worldwide, and “Finding Dory,” which has grossed more than $900 million.

Shares of Disney dropped less than 1% to $95.75 on Monday. The stock is down about 9% this year. Over the past year, investors have been concerned about the lack of subscriber growth at ESPN, the crown jewel of Disney’s media networks unit. Earlier this year, Nielsen Co. said that ESPN lost 1.2 million subscribers in 2015.

“The desire to watch sporting events live and the abundance of sports rights makes ESPN the most valuable piece of real estate in pay-TV today, but we expect slower growth than in the past as competition for consumer time and entertainment dollars increases,” wrote analyst Robin Diedrich of Edward Jones Research in a note published July 29.

The layoffs at Disney’s Imagineering reflect the organization’s variable approach to hiring.

“Walt Disney Imagineering is a project-based organization, and we continually evaluate and adjust our resources to support the design and development of Disney theme parks, resorts and experiences around the globe,” the company said in a statement Friday.

Robert Niles, author of the Theme Park Insider website, said Disney Imagineering hired extra workers to help complete Shanghai Disney, which might explain why some workers are being laid off now that the project is finished.

“I think they absolutely bulked up for this,” he said.

Although the Shanghai Disney project is open, Disney is still working on several theme park projects across the country, including the new Star Wars lands at Disneyland in Anaheim and Disney’s Hollywood Studios in Florida as well as a new Avatar land at Disney’s Animal Kingdom in Florida.

Former Imagineer Steve Diggins knows what it’s like to get laid off after Disney opens a theme park.

He joined Imagineering in 1989 and among the projects he worked on was the Visionarium attraction built at Paris Disneyland. That resort opened in 1992 and about two years later he was out of a job.

Diggins said he was aware it was a possibility that he would be let go because “everything at Imagineering is project-related.” Still, it was a disappointment, said Diggins, who remains acquainted with people who work at Imagineering.

“When it happens to you, you feel bad,” said Diggins, who is now a video engineer at KTLA. “I was hoping to stay there.”

Diggins said he expected that some of the Imagineers who were let go last week had to know the cuts were coming.

“They will gear up for a big theme park, and when that theme park [project] ends, some people will move onto other things and it is not always possible [for everyone],” said Diggins, who in the early 2000s had another stint at Disney as an assistant film editor for Walt Disney Television Animation. “I think most people should know this.”