Floyd Norman: An Animated Life is a feature-length look the prolific animator and story artist’s life from growing up in Santa Barbara, CA to his years working as an animator at Disney, Hanna-Barbera, Pixar and more. The undisputed “Forrest Gump” of the animation world, Norman was hired as the first African-American at Disney in 1956. He would later be hand-picked by Walt Disney himself to join the story team on the Jungle Book. After Disney’s death, Norman left the studio to start his own company to produce black history films for high schools. He and his partners would later work with Hanna-Barbera, and animate the original Fat Albert Special, as well as the titles to TV mainstay Soul Train.

Life as an animator is a nomadic one, but Norman spent the majority of his career at Disney, and views it as his “home.” Retired by Disney at age 65 in 2000, the documentary focuses on Norman’s difficulty with a retirement he was not ready for. Not one to quit, Norman chose to occupy an empty cubicle at Disney Publishing for the last 15 years. As he puts it, “[He] just won’t leave.” A term has been coined by Disney employees — “Floydering.” While not on staff, his proximity to other Disney personnel has led him to pick up freelance work, and he continues to have an impact on animation as both an artist and mentor.

More at the links below.

Floyd Norman on His Days as a “Lowly Assistant”

ARRI IIC and lenses from the LACMA Kubrick exhibit.

Some of the questions are in French. Click on the arrows in the lower right to make full screen.

The Eames Office curated the entire IBM Pavillion, with many movies and exhibits on the ground floor. The climactic feature was the movie THINK, shown in the egg-shaped structure which towered 90 feet overhead. This movie gives the viewer something of the entire pavilion experience, including THINK.

A multi-screen presentation at the Ovoid Theater of the IBM Pavilion of the New York World’s Fair, Think was projected on 22 separate screens (shaped in circles, squares, triangles, and rectangles), and included a live host. The 22 images were not projected simultaneously, and included live and still motion and animation. The IBM Pavilion, including the Ovoid Theater, was designed by Eames. Think is available in a single screen version titled View From the People Wall: A single screen condensation of the elaborate multi-image show at the IBM Pavilion in New York, aimed at showing that the complex problems of our times are solved in the same way as the simple problems, they are just more complicated. Musical score by Elmer Bernstein. 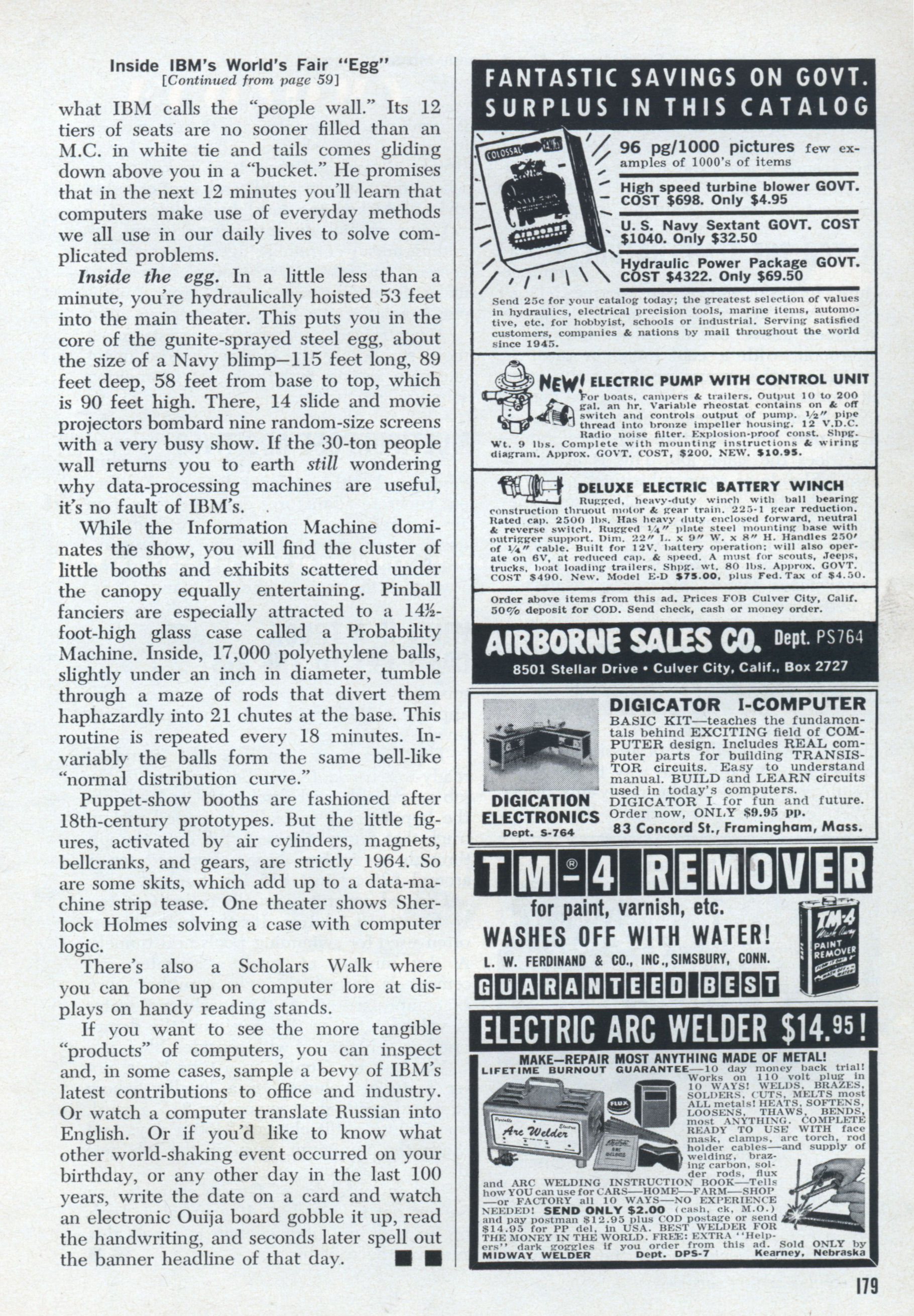 The husband and wife team of Charles and Ray Eames had an especially strong influence on IBM’s thinking. They were best known at the time for their molded-plastic and plywood chairs. But for IBM, the couple designed everything from the exhibit at the 1964 World’s Fair, to the film Powers of 10, to the famous exhibit Mathematica, to dozens of educational films for school and television that helped teach generations about science, math and technology. As designers, Charles and Ray Eames were problem solvers. They dedicated themselves to making things better, not just different. “They taught that if you don’t understand something, you can’t design it,” says Lee Green, the vice president in charge of IBM’s Brand Experience and Strategic Design. “Design has to be purposeful. It’s not about cosmetics and decoration. It’s about substance.” Or, as Charles Eames put it, “Design is a plan for arranging elements in such a way as best to accomplish a particular purpose.” By that definition, IBM’s researchers could be seen as designers, and its designers have been researchers and teachers.

Gary Owens performs in a skit at the 60th Primetime Emmy Awards with Lilly Tomlin as Ernestine.

Here is a very good interview from the Laugh-In DVD collection with Gary Owens.

He talks about how he got his start in radio and then television. Gary also goes into depth about his animation voice work, meeting Walt Disney, as well as his connection to Mel Blanc.

I remember running into him at the Howard Lowery Gallery in Burbank. He was very nice and told all these great stories.

Since the original video has been removed, I have replaced it with these.

In the late ’60s and early ’70s, filmmaker Peter Bogdanovich had conducted extensive interviews with Welles, but a number of circumstances–including the director’s decision to compose an autobiography that he never got around to writing–kept the interviews out of the public eye. Finally edited and annotated by Jonathan Rosenbaum, these conversations give wonderful insights into Welles’s craft and personality. He discusses his forays into acting, producing, and writing as well as directing, his confidences and insecurities, and his plans for film projects that were either never made or only partially completed.

In a 1969 interview, cast and crew remember working with the mad genius Orson Welles on his groundbreaking first film.
Republished from the DGA’s Action magazine (May-June, 1969)

Magician: The Astonishing Life and Work of Orson Welles looks at the remarkable genius of Orson Welles on the eve of his centenary – the enigma of his career as a Hollywood star, a Hollywood director (for some a Hollywood failure), and a crucially important independent filmmaker. From Oscar-winner Chuck Workman.

From our friends over at DisneybyMark.

Walt Before Mickey, is a big screen movie about the life of a simple man with a big dream: Walt Disney. Set in the early 1900′s, the film is based on the book Walt Before Mickey that chronicles Walt’s early years and his rise to success. This feature film is being produced by Armando Gutierrez (Henry & Me), Jeff Rice (Executive Producer of End Before Watch, 2 GUNS, Broken City, Lone Survivor), Christian Vogeler (Silver Linings Playbook), Arthur Bernstein (Hitters Anonymous), Ben Everard (Keeping Time), and directed by Ari Taub (Last Letters of Monte Rosa).

The hardcover book Walt Before Mickey, written by Timothy Susanin, and its forward written by Diane Disney Miller, was the only book ever supported by the Disney family. “Walt remains a 20th century icon, and I am happy Armando is bringing his incredible story to the big screen,” says Timothy Susanin. “‘Walt Before Mickey’ is a fresh take on a classic American ideal, exploring a part of Walt Disney’s life that little is known about,” says Armando Gutierrez. A release date has not been set.

Walt Before Mickey is a feature film production of The Dreamer Movie, llc. and is based on the book Walt Before Mickey by Timothy Susanin with foreword by Diane Disney Miller. This company is not associated with the Walt Disney Company

A second Biopic of Walt Disney is out. From Cartoon Brew.

As Dreamers Do, directed by Logan Sekulow (God Bless Vegas) and written by Wendy Ott, is described as “an art film for families.”

“This movie is a passion project for me,” Sekulow said in a recent press release. “Since before I went into film school, I dreamed of telling a story like this. Walt has been a lifelong inspiration, and I hope to share this often-untold adventure in a unique, creative and entertaining way. I’m a hardcore Walt fan, and we will not disappoint.”

It stars Olan Rogers as Walt Disney, Mark Stuart and Tyler Hayes as his parents Elias and Flora Disney, Ryan Dunlap as his brother Roy and William Haynes as Disney’s friend/business partner Ub Iwerks. Country crooner Travis Tritt narrates the film. Filming began earlier this month in Franklin, Tennessee, with a spring release date planned. The production is being documented on the official Facebook and Twitter pages.

From JerryRees.com Go there for more great photos and information. I worked with Jerry Rees when I was at Walt Disney Imagineering. His is a very talented guy and is best known for the delightful Brave Little Toaster. He went to Cal Arts.

This award winning short film, combining live action and animation, played in the main theater at Disney/MGM Studios’ Animation Pavilion. Walter Cronkite, in his familiar role of trusted newscaster, set out to reveal the secrets behind Disney animation. Robin, in the role of Disney World tourist, volunteered to help with Walter’s show-and-tell. With a twinkle in his eye, Walter called on his assistant Tinkerbell to transport them to a magical limbo where anything could happen.

Step by step, Robin was transformed into an animated character – a Little Lost Boy from the classic film Peter Pan. Robin suddenly found himself facing the notorious Captain Hook. Experiencing everything from utter fear, to total joy, Robin learned that strong and believable emotions have always been at the heart of the Disney animation.

Rees, who began his career as a Disney Feature Animator, sums it up this way; “It’s not how you move the drawings, it’s how the drawings move the audience.”

Interesting that a technology company like Google is turning to hand drawn animation.

A celebration of life through the hand-drawn line, Duet is the latest in a series of Google ATAP’s Spotlight Stories, interactive short films made exclusively for mobile devices.

Animator Glen Keane unveiled a first look at his latest and most personal project to date, as part of a special ATAP (Advanced Technology and Projects) Session at the Google I/O Conference in San Francisco, California. Glen gave a live demonstration and talk through the creative process behind Duet.

Animated in its entirety and directed by Glen Keane (former Disney animator and creator of such beloved characters as Ariel, Beast, Aladdin, Pocahontas, Tarzan and Rapunzel), Duet tells the story of Mia and Tosh and how their individual paths in life weave together to create an inspired duet. The unique, interactive nature of the story allows the viewer to seamlessly follow the journey of either of the two characters from birth to adulthood.