Excerpts from  Bill Desowitz at Thompson on Hollywood.

Oscar-winning cinematographer Robert Richardson ASC digs into the technical nitty-gritty of the large-format anamorphic film process that hasn’t been used in nearly 50 years.

The comeback of motion picture film will literally get its biggest boost yet with the Ultra Panavision 70 release of celluloid defender Quentin Tarantino’s post-Civil War Western “The Hateful Eight.”

Shot on 65mm film with classic Panavision lenses in the widest aspect ratio of 2.76:1, this marks the first anamorphic 70mm theatrical release in nearly 50 years. The two-week roadshow engagement (they’re aiming for 100 theaters with the Cinerama Dome in contention for LA, of course) would be the best holiday gift for cinephiles.

“The Hateful Eight” will also pit three-time Oscar-winning cinematographer Robert Richardson (“Hugo,” “The Aviator,” “JFK”) in a shoot-out with Emmanuel “Chivo” Lubezki, who’s going for a third Oscar in a row for his own frozen wilderness adventure, “The Revenant,” from “Birdman” director Alejandro G. Iñárritu. (Both films are racing to the editorial finish line for a Christmas Day release.)

Richardson proclaimed that Ultra Panavision 70 more than reinforces the notion that film can coexist with digital: it provides such unparalleled scope, resolution and beauty that everyone should be using it. “When we saw Sam Jackson in a closeup — or anyone — it just aided the skin. It’s remarkable. We never used diffusion, the only filters we ever did were outside. It was stunning.”

The last Ultra Panavision 70 release was “Khartoum” (1966), the biopic with Charlton Heston as British Gen. Charles Gordon. The list also includes “Ben-Hur,” “Mutiny on the Bounty,” “It’s a Mad, Mad, Mad, Mad World,” “The Fall of the Roman Empire,” “The Greatest Story Ever Told” and “The Battle of the Bulge.”

In fact, Panavision took Tarantino into a screening room and surprised him with the chariot race from “Ben-Hur,” starting with the sides at the normal width and then spread out to expose the full frame — and the film nerd was totally hooked on Ultra Panavision 70. 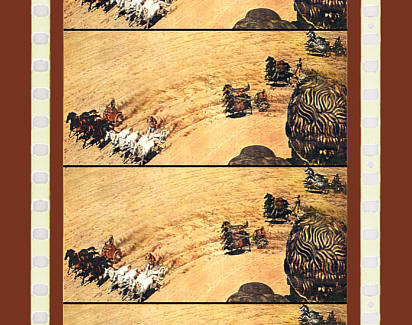 But this all began accidentally: “We went in thinking we were going to shoot standard format for 65mm and one day I was with Gregor Tavenner, my first camera assistant, and Dan Sasaki [Panavision VP of optical engineering] was showing us standard Panavision lenses for 65mm and while looking at them, I slipped behind the curtain and saw this shelf filled with odd-shaped lenses [triangular with prisms]. They were Ultra Panavision lenses,” Richardson said.

Panavision also made a 2,000-foot magazine for the film cameras to accommodate Tarantino’s penchant for long takes.

The team brought a very analogue approach to shooting in Telluride and onstage at LA’s Red Studios, where they lowered the temperature to 30 degrees. They screened dailies in 70mm, with no digital intermediate, and the film is being color-timed photochemically, the old-school way, by FotoKem.

“There’s a great deal of interior landscape available and the actors loved it. Also, I think they enjoyed the visual feast that was given to them in terms of their own faces,” said Richardson, who admitted, though, that throwback photochemical color timing has been frightening.

“I’d become reliant on a digital intermediate for fixing things in post and you can let certain things go. For example, you realize that the backgrounds are blown out but you don’t want to take the time to put a hard gel up. You know you can rescue that with the window and tracking, or if your weather doesn’t quite match, it’s easier to work a look between sunny and overcast. But not when it came to this gorgeous look. And this is just the beginning, as Gareth Edwards’ “Rogue One: A Star Wars Story” is also reportedly being shot with Ultra Panavision 70 lenses.

Thanks to the Widescreen Museum and In70mm for technical information.

Parts of this story originally appeared in Carolyn Giardina’s article in The Hollywood Reporter from Cine Gear Expo.